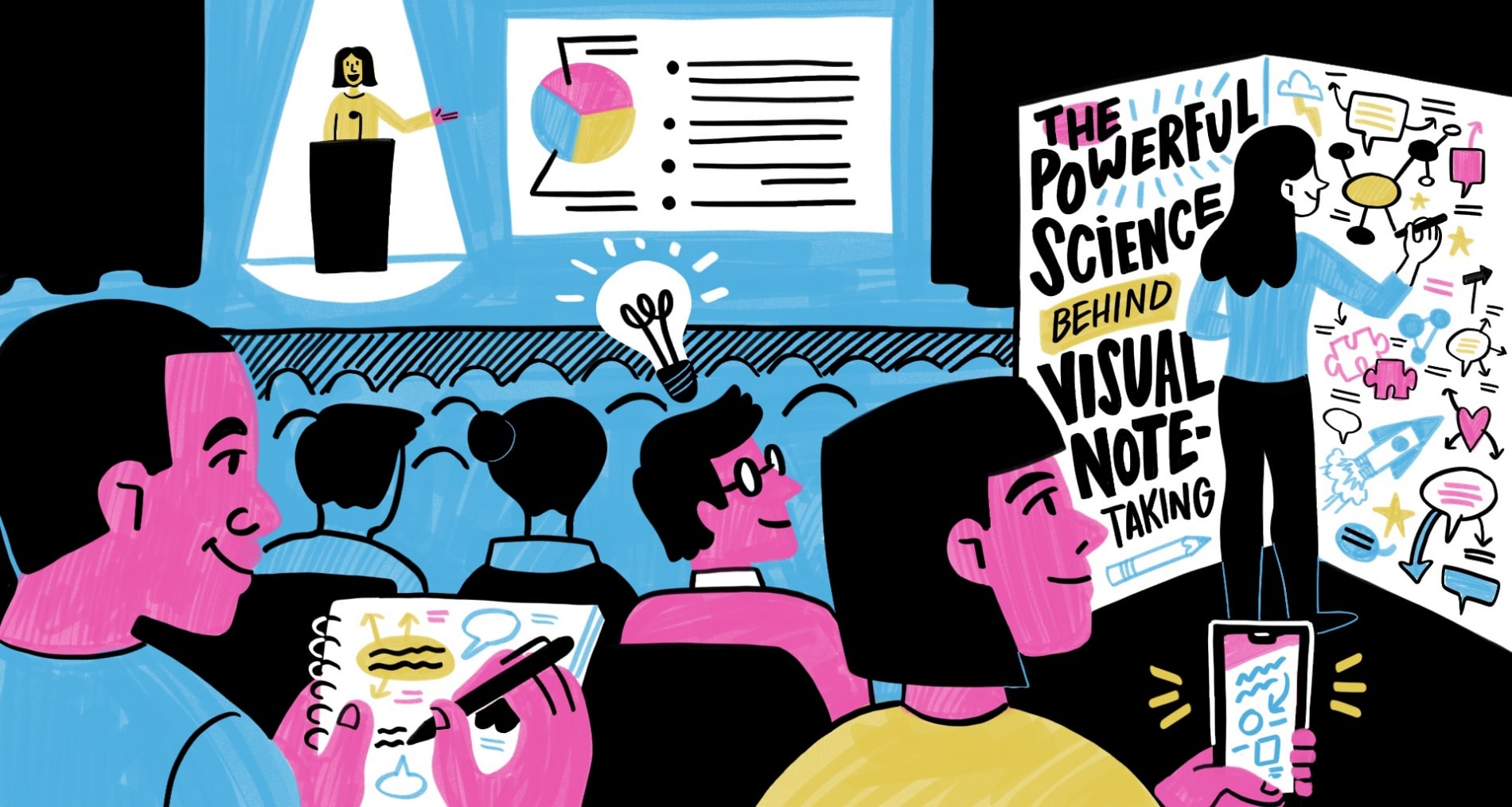 The Powerful Science Behind Visual Note-Taking

At Ink Factory, we use the term “visual note-taking” to describe our work: real-time note-taking comprised of hand-drawn images and text. Visual note-taking is a form of visual communication that’s perfect for live events like meetings, webinars, keynote speeches, presentations, and much more. Both viewers of visual notes and visual note-takers themselves can benefit from this live drawing by boosting their ability to process, retain, and recall information. That “mental boost” comes from the visual aspect of visual note-taking. In fact, visuals are a proven way to increase engagement with content, improve information retention and understanding, and more. 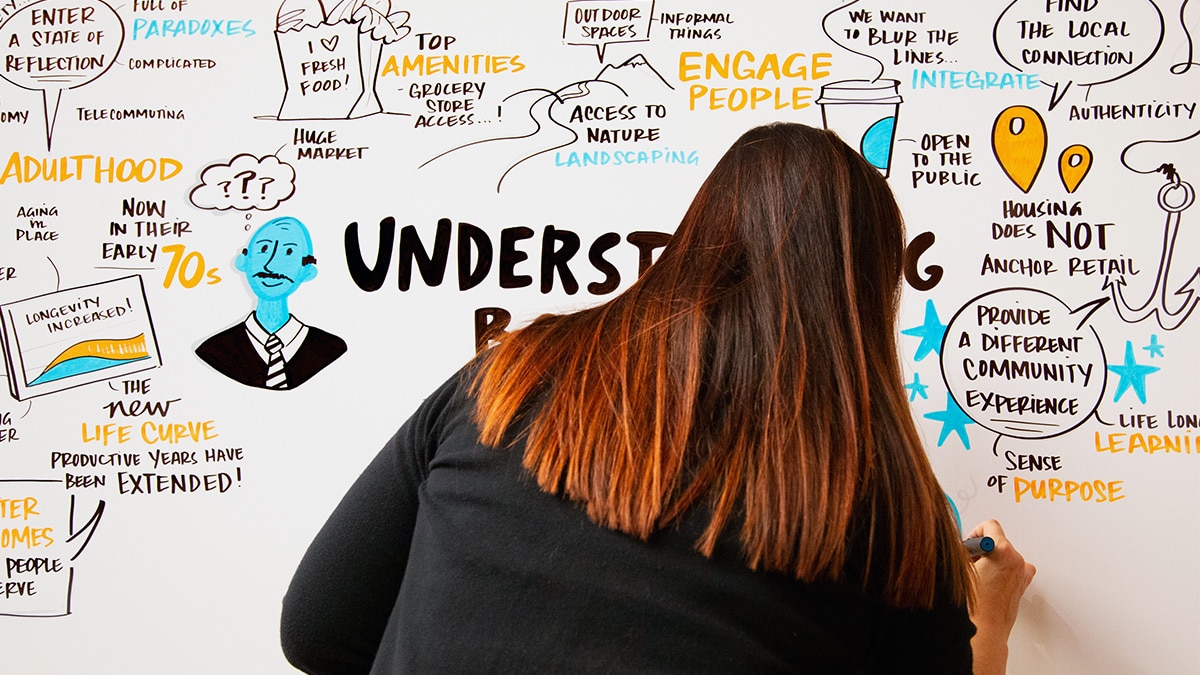 What is Visual Note-taking?

Visual notes are drawings that use a combination of text and imagery to convey key points from presentations, meetings, class lectures, or anything, really.

Visual notes are created in real-time while actively listening to content.  They are typically drawn using pen and marker and can also be drawn digitally. Their composition is non-linear.

Visual notes are not drawn left to right and top-down like traditional notes. They are developed by making connections between content. They use illustration as well as handwritten text to communicate information and represent concepts. This combination of text and simple illustrations create simple “bookmarks” in the brain.

In a world where PowerPoint presentations are considered too wordy, audiences are looking for easier ways to digest information. Well-designed visuals help viewers more easily understand information. The process of drawing by hand in real-time further drives engagement–people are captivated by watching visual note-takers work! 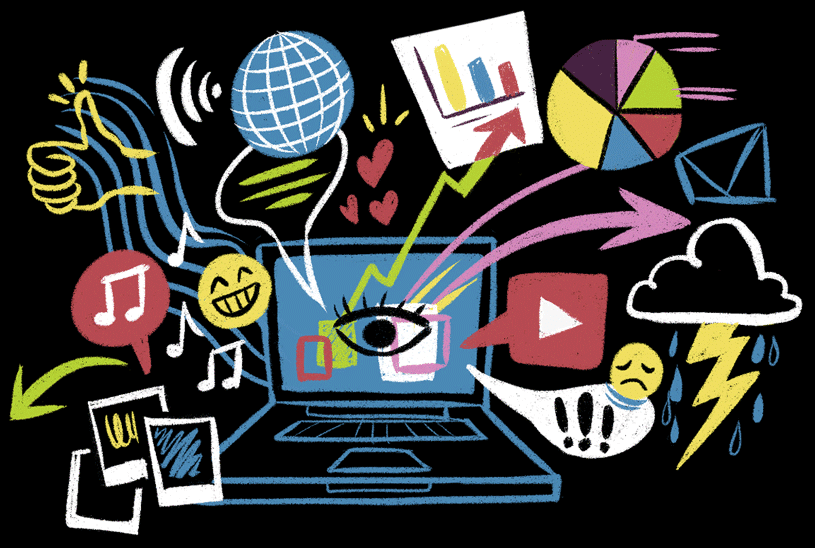 Visual information “has increased 400% in literature, 9900% on the internet, and 142% in newspapers.” (Zacks, 2002). Combining visuals with text is simply more engaging!  Researchers have found that color visuals increase a person’s willingness to read by 80 percent (Green, 1989). That’s probably because sixty-five percent of people simply learn better visually (Yapton, 1998). 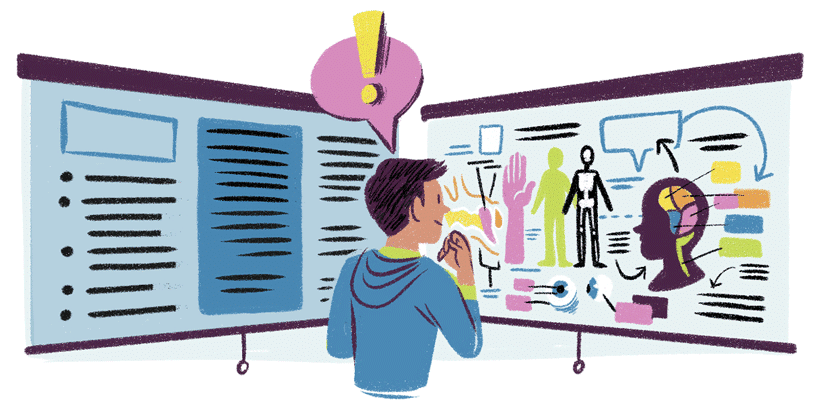 When combined with the audio of a presentation or speech, visuals have a powerful impact on memory. Graduate students at the University of Wisconsin-Madison found that visuals are more effective than audio at achieving higher memory retention. Specifically, it seems that the use of visuals with text is easiest to remember (Udomon, et al., 2013).

“Words are difficult for the brain to retain. Visuals are concrete and more easily remembered.”

We’re not just talking about an increase in short-term recall.  Visuals stick in our long-term memory, unlike text. A study found that participants who viewed only text remembered 10 percent of what they read after three days.  Those who viewed text paired with visuals remembered 65 percent of the information three days later (Medina, 2008).

Want to make sure your ideas aren’t forgotten after one event? Or encourage your team to sustain momentum after a strategy meeting? Use visuals! 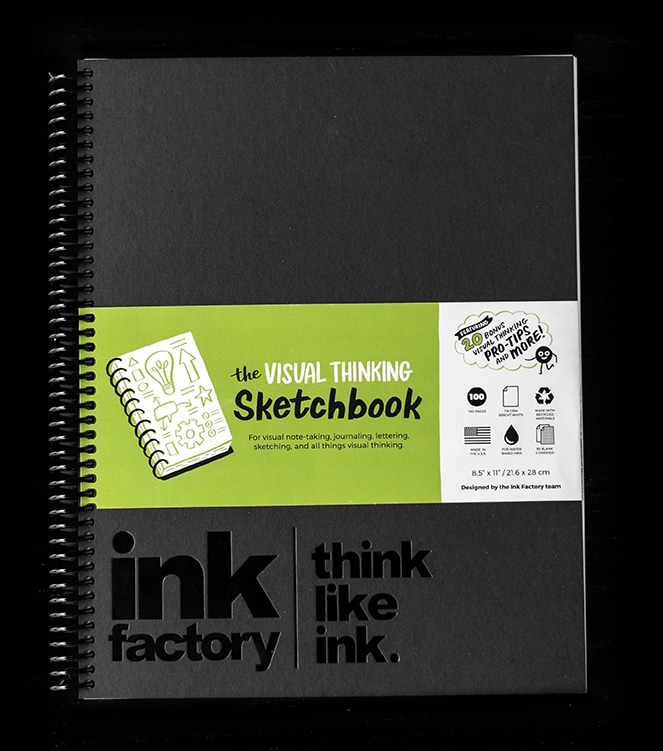 Get the perfect companion to your visual learning journey. Designed by the artists at Ink Factory and features 20 of their pro-tips.

Our eyes are constantly looking for concepts to latch onto–and we are much better at finding concepts in visuals than in text (Trafton, 2014). In fact, the brain processes visuals 60,000 times faster than text (Semetko & Scammell, 2012). When visual notes are used in a conference or meeting, many of the viewers will be able to more quickly understand the content over content presented without visuals.

One study explored the way people interpret instructions on medicine packaging. Researchers found that people following directions with text and illustrations did much better than those following text-only directions (Levie & Lentz, 1982). We often rely on visuals to process information, so picking up a marker and communicating with a visual language is intuitive to many people.

YOU should start taking visual notes!

Visual note-taking is similar to traditional note-taking: anyone can do it regardless of his or her drawing ability. And there’s no pressure when you’re learning to take your own visual notes: no one else will see them and they serve as great reference material. 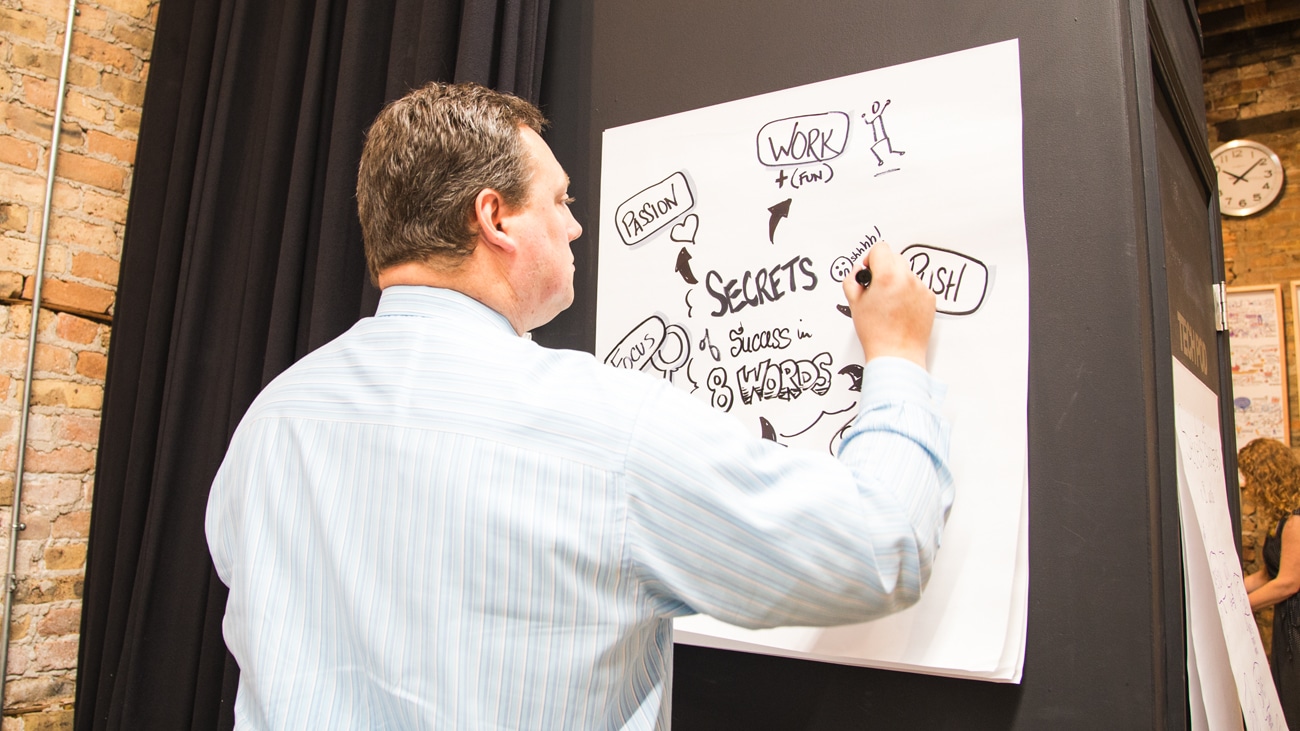 Visual note-taking goes beyond pretty pictures. It’s a tool anyone can use to improve their ability to retain information. Unlike traditional visual art forms, there is no pressure to make beautiful images.

When you start utilizing visual notes, you start to process and reframe information in your own language. This leads to better information retention. In a study completed by Princeton and UCLA, professors discovered that students who took handwritten notes did better with memory recall than students who took notes with their laptops (Herbert, 2014).

“When you start taking visual notes you start to process and reframe information in your own language.”

Research suggests that even the simple act of doodling can help assuage boredom, keeping the brain from entering a daydreaming or “idling mode,” which helps individuals stay focused during an otherwise stimulating activity (Schott, 2011).

Previously maligned as a sign that students aren’t paying attention in class, a study found that a group who doodled during a monitoring task recalled 29 percent more information than the non-doodlers (Andrade, 2009).

“A group who doodled during a monitoring task recalled 29 percent more information than the non-doodlers.”

Letters themselves are a visual means of communication. Early language started with pictures.  Combining words with illustrations is a great way to communicate with others (Childers et al., 2013). When you consider the origins of visual language and communication, taking visual notes makes sense!

Interested in learning how to become a visual note-taker? We host full-day workshops that are a deep-dive into the fundamental skills behind taking visual notes. Our public workshops are now available on-demand! 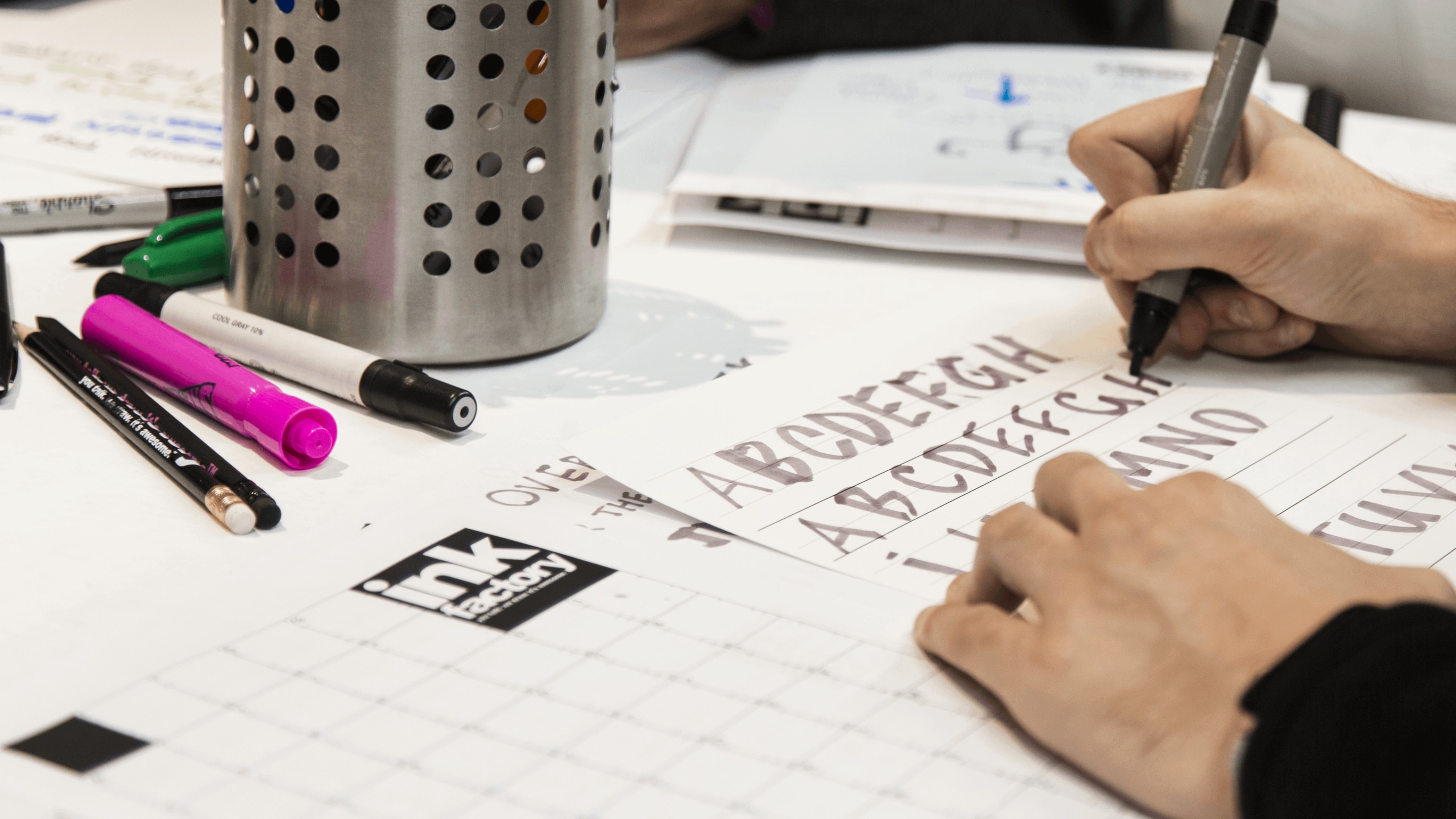 Wait, there’s more! Subscribe to the Ink Factory newsletter to learn the latest on visual trends.

With a community of 4,000+ visual thinkers, you’ll be in good company. Join us!

Ink on Paper: Some Notes on Note Taking. (2014, January 28). Retrieved August 30, 2016, from http://www.psychologicalscience.org/index.php/news/were-only-human/ink-on-paper-some-notes-on-note-taking.html 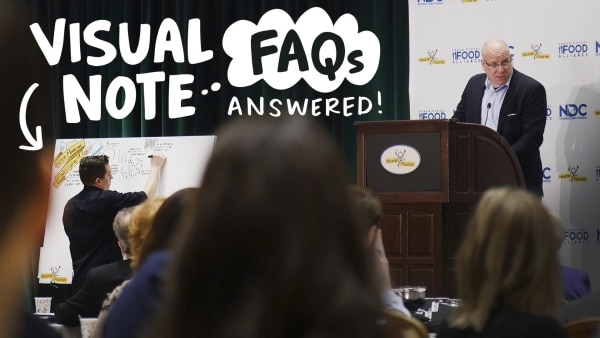 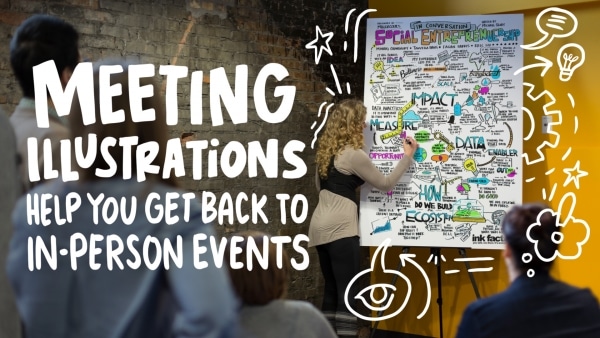 Meeting iIlustrations help you get back to in-person events 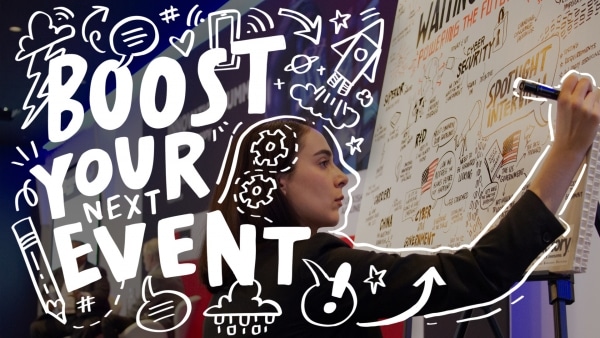